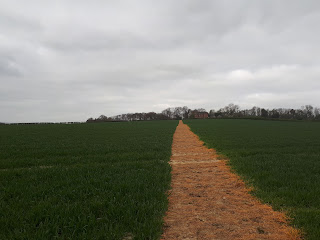 A quick trip out to find a few local sites with Tricia .
Oxford W6648 11 [P]AFU took off from RAF Shawbury on the morning of the 29th of December 1943 for a training flight to the west of the Wrekin the young Pilot Officer Gerald Obenauf Dawson was to practice climbing turns , stalls and single engine flying , at about 10.45 am the Oxford was over Cressage, Shropshire and was seen to be slowing into a stall but sadly the young pilot misjudged the height available as the plane dropped out of the stall into a spin the pilot tried to recover but with no time left the plane crashed on the slopes of Harnage woods killing P/o Dawson . 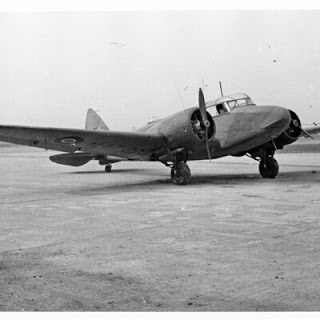 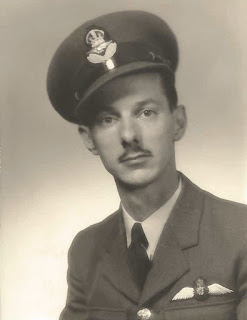 In the wood today all that shows is a break in the trees and disturbed growth on the slope as the woods are private I only took photos and left
P/o Dawson is buried at Blancon Cemetery Chester . 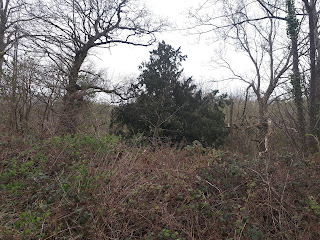 A work trip to the south to Cove gave me the chance to visit the crash site of a very unusual plane.
At the end of fighting in WW2 Europe, allied forces had been finding many weapons and technology and set about evaluating them and seeing what they could learn. One such weapon was the Do335 a push puller type of aircraft only a very few were captured by American forces in the factory was a Do335-12 trainer [RP+UB] 240112, this plane was to have gone to the US but British Intelligence worked a deal for 10 FW190's and the plane was picked up and flown to RAE [Royal Aircraft Establishment] Farnborough, Hampshire in September 44 for test flying.
At 11.30am 12th January 1946 the now recoded AM223 Do335 taxied out for its 3rd flight since its arrival, at the controls was the commanding officer of Farnboroughs Experimental Flying, Group Captain Alan Frederick Hards,DSO. The plane took off watched by test pilot Captain Eric 'Winkle' Brown who had trained Group Cpt Hards on the 335 and this was Hards first solo.
Half an hour later Brown saw the plane returning to the base but he also saw it was trailing smoke from below the rear engine, it is unknown if Hards knew of the fire as it would have been next to impossible for him to have seen anything of the rear of the plane. Hards entered the circuit and turned for the duty runway but sadly the fire must have burnt through the tail controls as the aircraft dropped suddenly, impacting a field behind Cove Junior School bouncing and hitting the headmasters house and damaging the school buildings, thankfully only 12 on the ground were injured as the school on that day had 300 children in classes and they were just about to break for lunch. The Do335 was completely destroyed and Group Captain Hards was found in the upper bedroom beyond help he was recovered and taken back to RAE Farnborough. 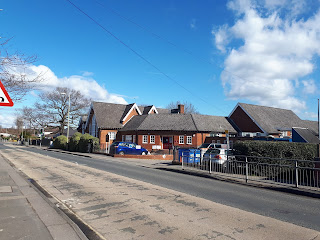 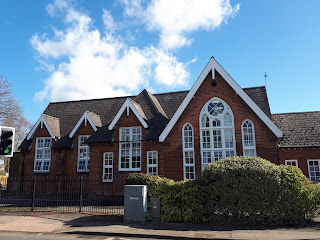 At the site today the school still stands and still serves the local juniors, the headmasters house was demolished after the crash and nothing can be seen to remind anyone of a sad but also very lucky day
Posted by matt zx at 09:22 No comments: 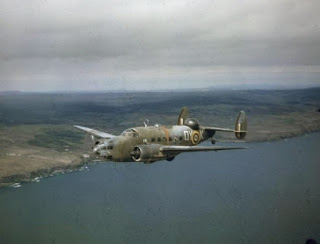 On a work trip to the south I managed to find a few minutes to look for the site of the loss of a No.1 OTU Hudson.
Hudson T9320 from 1OTU RAF Siloth, Cumbria was sat waiting to take off from RAF Eastleigh, Hampshire on the afternoon of the 15th of August 1940. The plane with 9 on board 8 of whom RAF and one civilian from the Sperry Company, was to fly back to Siloth via RAF Northolt and return with crew who had been ferrying another aircraft to Eastleigh.
The pilot, talking with a civilian and the Air Watch Officer was told that it was not advisable to leave as an air raid was expected and a ‘Yellow’ state of warning was in effect, the pilot anxious to get away before the raid started decided to go and the Hudson taxied out.
Lifting off the pilot climbed the Hudson to 700ft but tragically ahead the 924th Balloon Squadron had just finished raising the barrage balloons to their operational height . T9320 struck one of the cables which severely damaged the plane and falling almost immediately, the Hudson impacted No 199 and 197 Nutbeem Road, Eastleigh destroying both houses and the plane. All on board were lost and sadly a large part of the plane fell onto No 195, this took the lives of the two occupants Thomas & Ellen Craig. 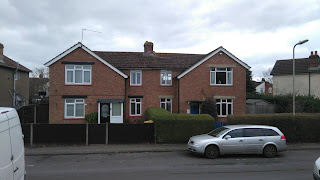 On the street today nothing shows to tell of this accident the houses were rebuilt and all traces long gone. 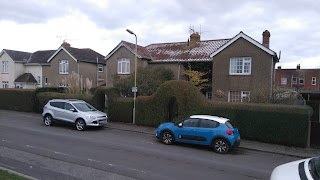 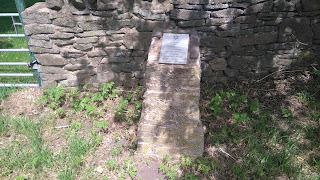 Next to St. Ediths Church in Church Pulverbatch is a memorial to Lt Arthur. D. Brody USAAF who lost his life in a field that the memorial overlooks.
At 6.30 pm on the 25th of June 1944, 4 P-47C Thunderbolts all from 551st FTS 495th FG, Atcham were on a practice flight over Shropshire. Climbing the fighters flew in formation until they were bounced by another flight, breaking formation the planes chased each other losing height until the fur ball broke up and the fighters tried to find their squadron mates.
One P-47 41-6231 coded DQ-B was seen by St Ediths congregation to be performing some aerobatics over the village, the fighter then passed low over the church and dipped towards the fields below but unseen by the pilot until the last second, a large tree was in his path. The fighter clipped the tree then cartwheeled and exploded scattering remains over a large area. 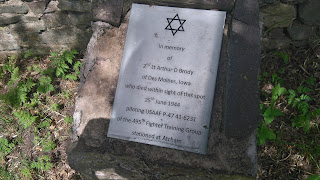 Locals had told a very helpful lady I met at the church, that young pilots from Atcham including Lt Brody, had been at a party the night before at Wrentnall House nearby, it was thought Lt Brody was putting on a bit of a show for his hosts. 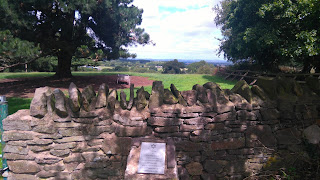 Lt Brody is Buried in Cambridge Madingley cemetery
Posted by matt zx at 10:01 No comments: 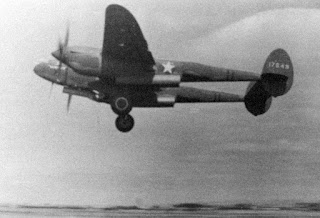 RAF Atcham, Station 342 , Shropshire a USAAF fighter Training base used mainly Spitfires and P-47s but also had a few P-38s one was lost in a quiet field not many miles from the base and I visited the site last year.

The flight went without any problems and the pilots set for home, nearing Bayston Hill just south of Shrewsbury Lt Green’s starboard engine cut out, Contacting his wingman by radio to inform him of his problem an instructor also on the same frequency advised 2 Lt. Green to climb before attempting to attempt a restart, but as the young pilot pulled the fighters nose up his other engine shut down and at only 2,000ft 2 Lt. Green had no choice but to force land ahead. 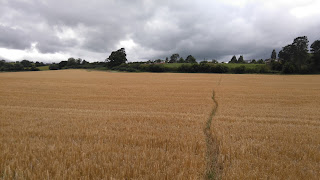 The now silent fighter headed for a field at Lyth Hill but sadly the field has a sharp rise up to a hedge, the p38 hit the rise and stopped instantly, the force broke the pilot’s seat loose and 2 Lt Green hit the instrument Panel and sadly lost his life.

A inquiry came to the conclusion the 2 Lt Green had mistakenly left his fuel cross feed drawing off the planes empty tank, not switching to the tank with fuel in it. Given the high workload the young man was under in formation flying in this challenging but excellent fighter, it is all too easy for a momentary error to become a major problem.

2 Lt Alan. Stewart. Green is buried at the US cemetery Madingley , Cambridge 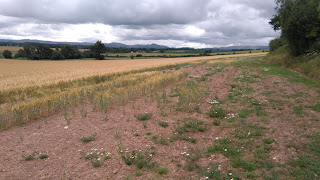 2 Lt Alan. Stewart. Green is buried at the US cemetery Madingley , Cambridge
Posted by matt zx at 05:28 No comments: 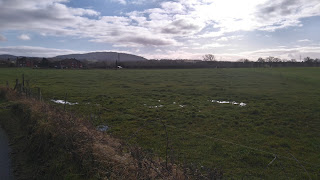 A muddy walk with Tricia to follow the last moments of the fight of Hawker Typhoon Ib R8633.
257 Sqn High Ercall, Shropshire were just starting their conversion from the Hawker Hurricane onto the new and impressive Typhoon but it was a conversion to a plane with an unknown fatal fault later resolved to make it one of the best ground attack aircraft of WW2.
R8633 took off on the warm afternoon of 29thJuly 1942 the pilot F/O Willian .McDunnough RCAF was to take the plane on a local aerobatics flight, just before 16.45pm a local school boy watched an aircraft dive suddenly. The tail broke off at the rear of the fuselage and the Typhoon snapped onto its back falling at high speed into the ground near the small hamlet of Sugdon, the remains of the tail fell nearly a mile away by Isombridge , later investigations came to the conclusion that the planes port elevator detached causing the loss of the tail . 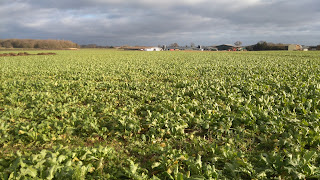 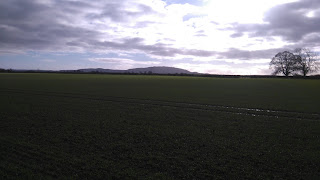 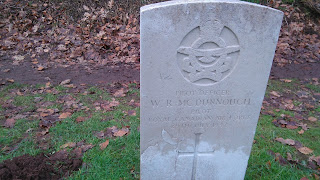 Sadly F/o McDunnough a popular and good pilot lost his life in the crash and was buried within sight of the crash at High Ercall’s St Michael and All Angels church.
Today a pleasant 2 mile walk passes the field where the main part of the plane fell which is now under a Beet crop, and then on to where the tail impacted. Though nothing shows of this loss on the ground, in the church you can find McDunnoughs grave next to 2 other RAF Graves in a quiet corner
Posted by matt zx at 10:15 No comments: 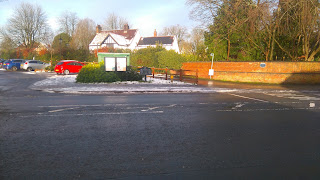 A drive out to Cheshire to find 2 sites.
In the warm days of April 1944 the pace of training was accelerating across England for D Day. Ablemarle aircraft of 42 OTU RAF Ashbourne, Derbyshire were to play a key part in operation 'TONGA ' the air dropping of the 6th airborne over Normandy.
Ablemarle Mk2 V1609 took off with its crew of 5 on a training flight to RAF Tilstock Shropshire. Climbing into the sunny day the crew set course, but some time later in the small village of Hartford locals heard the approach of a plane. This plane grew closer and passed over Chester Road it then began a turn to pass over again this time lower. V1609 turned and dropped lower, but on this pass the crews luck ran out clipping the chimney of a cottage in a row called 'The Villas', the damaged plane fell and crashed across the road into a wall and broke up over farm land on Grange Farm behind the wall. 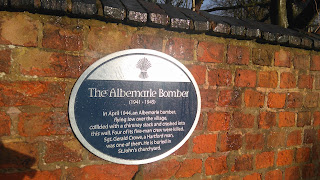 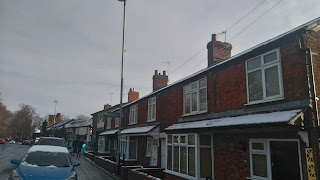 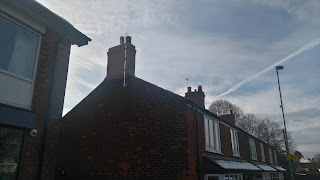 The rear turret was thrown onto the road with its injured occupant trapped inside, locals ran to help but sadly only the Gunner was saved from the crew of 5.
On the street today nothing shows but a small plaque placed on the wall next to the crash site, this happened after local objections to a housing development on the site and fears that these young men would never be remembered after the area was put under tarmac.
Across the road the villas still stand and if you look carefully you can see the rebuilt chimney on the end of the row. One of the crew lost, Sgt Aubrey Graham Crowe, lived a few doors down from this house and it is likely the crew fell into a all too common trap of performing high jinks over a family home as they were 50 miles off the intended track.
Sgt Crowe rests in a family plot in St Johns church overlooking the crash site.
Crew lost in V1609 =
F/Sgt R.P.H.Brown
W/o F.A.Andrew
F/Sgt A.G.Crowe
F/Sgt J.Crichton
Survived =
Sgt A.Ewen 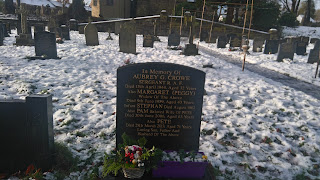