The photo below shows most of the crash site of hunter XL575 which hit the ground on the left side of the picture remains were thrown all over the hill for about 200yrds + there are many items strewn about but the clear felling has covered most of it !
XL575 crashed during a storm on 08/11/71 with the loss of F/Lt J.R.Metcalfe and 2nd Lt B.Yong . 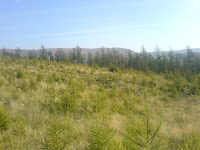 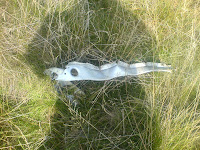 one of the larger remains i found 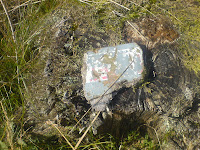 i think this item is from the cockpit area as it has stenciled painting in red and white similar to bits i have seen on ejector seats !
this is a easy site to get to as its very near the valley road about 3/4 of a mile but it is very rough
going and the site has some very nasty pitfalls hidden under the grass so be very carefull !
both crew were killed in the crash so be respectful of this site please as the first time i went there was the remains of a flight mask high in one of the trees a settling reminder !!!
ref 135/775758 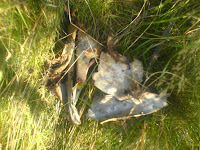