This is the impact crater high on dolwen hill of lancaster w4326 which crashed on the night of 16th 0f november 1942 , a photo flash exploded in the rear of the plane causing the plane to break up over a wide area! sean and mick from peak wreck hunters are on the far side of the crater 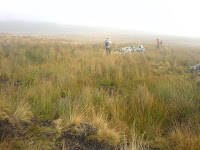 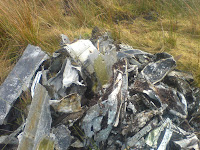 a large pile of remains has built up at the edge of the crater mostly skinning and fuel tank left over from a large dig at the site and seems that it is still on going as there has been very recent digging in the crater ! there is a small memorial slate on the smaller pile 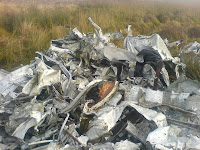 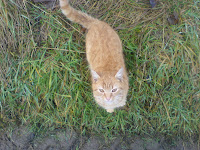 one overly cute farm cat on the way up the hill !!
this site is very near the high ground wrecks ref pop over to peak hunters they will have much better refs
thanks to sean and mick for a good day
Posted by matt zx at 02:07