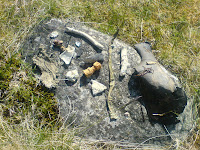 These few small relics are from p-47 41-6195 piloted by 2nd lt orin wahl the plane crashed not far from aled isaf reservoir the pilot got into trouble with the p47's bad habit of biting without warning ! after baling out he was found later in a local pub a very good landing !. 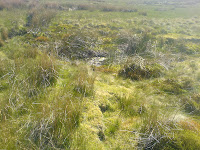 On the moor there still remains a large crater this did have lots of bits strewn about but as per some nice person cleaned it up the light fingered to**ers!.
ref near 915 592
Posted by matt zx at 06:49