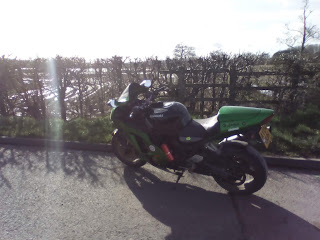 On a rare sunny Trip out to Malvern Worcestershire I headed to the small hamlet of Madresfield where on Jennet Tree Lane is a memorial to F/O Franek.Surma from 308 ‘City of Krakow’ Sqn RAF Baginton, Coventry .
F/o Surma in Spitfire R6644 scrambled on the afternoon of the 11th May 1941 with another Spitfire flown by Sgt Widlarz and headed to intercept a radar contact over Kidderminster finding nothing the pair patrolled south until they were near Malvern Link ,flying over the town Spitfire R6644 without warning caught fire trying to get the plane down F/o Surma began preparing to force land but oil spraying from the failing engine blocked the pilots vision with no options the pilot turned the plane away from Malverns houses, rolled the plane on its back and bailed . 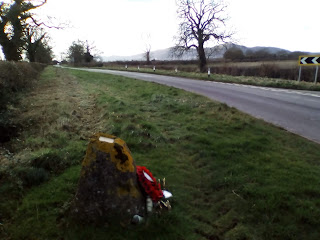 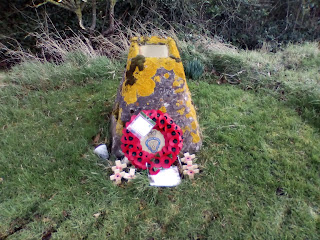 R6644 dived into an open field near the Memorial ,F/o Surma landed safely and was taken to Bosworth Farm where he was well looked after until taken back to base .
F/o Franek Surma an Ace with 5 confirmed kills and 5 damaged or probables was lost during combat with 109's in Spitfire AB930 on the 8 November 1941 over Dunkirk , sadly his remains were never recovered 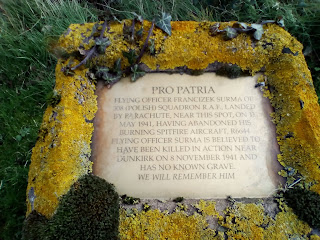 The small memorial built by the Malvern Spitfire team was unveiled in September 1987 along with a excavation of the crash site for much more on the history on this crash and F/o Surma it is well worth finding a copy of 'The invisible thread ' or 'Spitfire voices ' by Dilip Sarkar MBE
Posted by matt zx at 05:24