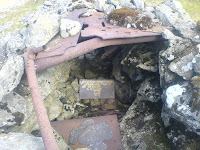 This small cairn built from some of the remains of avro lincoln RF511 holds a small plaque to the crew who were lost when the bomber hit high on cwm Llafar on the 15/03/50. 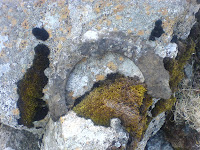 Part of what i think is a astro navigation unit seen the same on the anson VV955 on tal-y-fan. 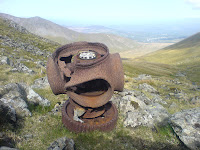 One of 2 propeller bosses still on the mountain 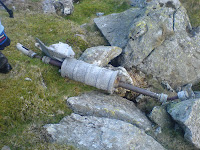 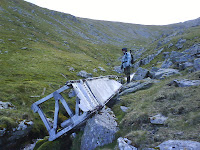 Part of one wing most of the wreckage is in the stream bed and as you can see some of it is very large the impact site has lost of parts strewn about including on of the bomb bay door rams .
ref top of wreck site .
SH 67992 63776
Posted by matt zx at 06:28

Another two plaques we didn't get there. Mind you, we did get the shiniest one, here: http://peakwreckhunters.blogspot.com/2008/04/avro-lincoln-rf511.html