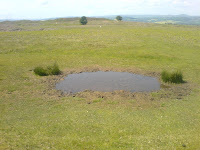 On this visit up Brown Clee Hill in shropshire with Adie we revisited some site i have not been to i about 10 years , this bare patch is not far from the ring fort on abdon burf and was the site of the destruction of a large pile of anti aircraft shells at the end of the war ,the shells had been collected at the Ditton Priors Royal Naval Armaments Depot. 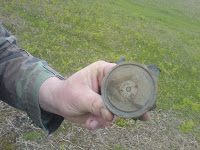 Some bit can still be found strewn about the area !. 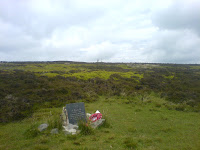 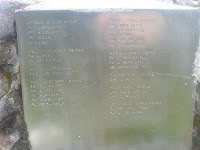 This memorial on the saddle near the top is to the crews of 9 aircraft that came to grief in the area ,the area by the towers is where 2 wellingtons crashed at different times ! 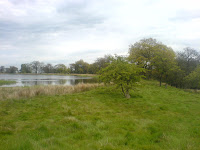 The picture above is of Boyne pool on the hill this is the site of the crash of TyphoonDN251 on the 21/11/42 ,the plane hit 200yrds off to the right and some of the engine made it to the pool ,the reduction gear was apparently removes some years ago from the pool when it was drained and may still be at the hall!.
Posted by matt zx at 00:11

There is a service held at the memorial every year with represenatives of a Birmingham branch of the Aircrew Association. Always a moving occasion. The memorial was erected by a number of 'magpies' who researched the accidents, interviewed surviving locals( including a shepherdess who received a GC with regard to one of the Wellingtons) and recovered wreckage with the permission of the the estate. Some of the items are on display at Sleap airfield, Shrops (including an engine bearer from the Typhoon) and other pieces at Fort Perch Rock, New Brighton, Birkenhead.

Thanks for the info Ian .