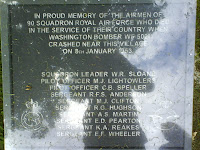 This memorial in the grounds of Llanarmon Yn Ial church is to Washington WF 502 which crashed on 8 January 1953 near the village about 6 miles from Ruthin. The aircraft belonged to 90 Squadron at Marham and was on a night bombing exercise.
The bomber broke up in a dive and the main section inverted and dropped into a wood. All ten on board were killed. Cause of the crash was not established by the Board of Inquiry. 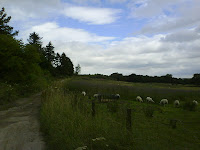 There is a ref that puts the the crash site at the far edge of this wood had a quick look but the area is very overgrown so maybe winter !.
Posted by matt zx at 09:16