Took a walk along to a small cove at Fydlyn Bay ,camel head ,Anglesey just up the road and was very surprised to find hidden in the rocks the remains of heavy shells that have been blown up here. 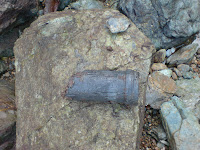 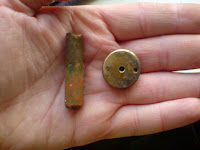 The bits are scattered about and one find was this base fuse , the shells had come from the SS Castilian around 1987 by as the R.N removed e.o.d.s. from this area, the SS Castilian sunk after running aground on The Skerries on the 12th February 1943 her cargo contained many 4.5 inch and 40mm A/A shells plus aircraft propellers . 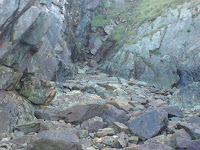 The rocks at the foot of the cliff are full of bits and there has been a rock fall most likely during demolition operations !.
Posted by matt zx at 07:56

I was 9 years old at the time and lived nearby. A friend and I rode to the bay on our bikes and were met by a number of military personnel coming ashore in RIB's loaded with crates of explosives. They took us up the cliff on the opposite side of the bay where we were able to watch the controlled explosions take place. The rock fall took place around a week later when another friend and I were looking for remains of the shells. Prior to this, we used to find almost complete shells and even took some home. My mum discovered them at the bottom of the garden. Needless to say, the police and the coast guard weren't too impressed with us...

lol no I bet they weren't
thanks for the comment Warren