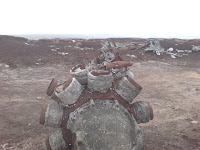 The first site on this walk is probably the most written about and visited crash site in the UK and is a RB-29A 44-61999 'over exposed' which crashed by Higher Shelf Stones 3/10/48 !
The crew of 13 were all lost !
Landon P. Tanner [pilot] ,Harry A. Stroud[co-pilot],Charles R. Wilbanks ,Ralph W. Fields ,Gene A. Gartner ,Saul R. Banks,David D. Moore,Donald R. Abrogast ,Robert I. Doyle ,William M. Burrows ,Clarence M. Franssen ,George Ingram Jr,Howard E. Keel !
The site is very accessible and there are some big bit's still around the peat moor maybe it's high public profile and the size of the parts have kept the worst excesses of the wreckage angels and magpies at bay ! 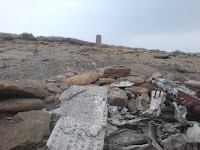 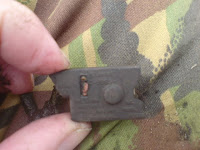 The next site is only about 1/2 a mile away and is of Lancaster KB993 which crashed on James Thorn with the loss of it's crew of 6 Canadians on the 18th of May 1945 ,
A.Clifford [pilot],D.Fehrman, M.Cameron,C.Halvorson , L.Hellerson, K,McIver.
No navigator was on board as it was only to be a local fight and he wouldn't have been needed !
The small amout of remains by the memorial is all that is left but can still turn up some nice parts like the thermo cover I found on my trip ! 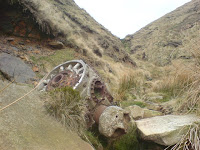 The climb down from Lancaster KB993 takes you into the deep ravine that contains the remains of C-47 Sky train 42-108982 which crashed at the head of the gully on the 24/7/45 while on a Transport flight From France to Scotland the crew of 7 were all lost ,
George L. Johnson [pilot],Earl W. Burns[co-pilot],Francis M. Maloney,Grover R. Alexander,John Dunlop Main,Beverly W. Izlar.
At the head of the gully there is some large bits partly uncovered from the peat they were buried in , if you cross the fence and head down the slope in the stream below there are bits of wreckage including one of the engines [the other is way down towards Glossop].
Posted by matt zx at 01:58

Hi Roger Fulton here, Tucson,Az. Stumbled on your site while blogging. Former docent 390th Bomb group tucson. B-17g wing. Looking around for crash sites for B 17's in your neck of the woods. If any u see, let me know at rogerfulton@live.com

Hi Roger thanks for the comment and will do, are you after Welsh sites or UK sites in general ?